Welcome to the Dark House Review 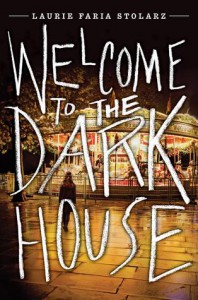 For Ivy Jensen, it's the eyes of a killer that haunt her nights. For Parker Bradley, it's bloodthirsty sea serpents that slither in his dreams.

And for seven essay contestants, it's their worst nightmares that win them an exclusive, behind-the-scenes look at director Justin Blake's latest, confidential project. Ivy doesn't even like scary movies, but she's ready to face her real-wold fears. Parker's sympathetic words and his perfect smile help keep Ivy's spirits up...at least for now.

Not everyone is so charming, though. Horror-film Garth Vader wants to stir up trouble. It's bad enough he has to stay in the middle of nowhere with this group-the girl who locks herself in her room; the know-it-all roommate; "Mister Sensitive"; and the one who's too cheery for her own good. Someone has to make things interesting.

Except, things are already a little weird. The hostess is a serial-killer look-alike, the dream-stealing Nightmare Elf is lurking about, and the seventh member of the group is missing.

By the time Ivy and Parker realize what's really at stake, it's too late to wake up and run."

I really did enjoy this book, and I'm very fond of Stolarz's work. This novel jumps around with narrative, allowing the reader to witness the book from different points of view. I actually enjoyed this aspect, because, unlike other books that I've read that have done this, the writing style and language changed between each character. One could tell which character was talking without even reading the heading under the chapter number. Each character had their own personality and there was a light character development that I rather found interesting instead of the usual drastic.

I didn't expect this book to be that of "horror" or "thriller". This plot took more of a "mystery" turn than anything else. After reading this, I received what I longed for. This book was like a stereotypical cheesy horror film. (I loved this idea, but I think that I'm the only one?) I mean, there were parts where I had an idea about what was going to happen, but there were some creepy bits and pieces thrown in that really set the book apart from others.

The one complaint that I have about this is the fact that it was very predictable. While reading through the point of view from each character, it became fairly easy to think. "Hey, I know this is going to happen," and then realize that I was right about it. The only unpredictable thing about this book was the fact that there will be a sequel that goes along with it and it's called Return to the Dark House. There were no hints to the sequel, but I guess how the ending worked out that that was the hint? I don't know. I guess I just missed hints if there were any.

All in all, I really did enjoy this read. Reading it took a few hours since this book only has 357 pages. The only downfall, again, was the predictable outcome of each character. On the other hand, did anyone else feel like the Nightmare Elf resembles Elf on the Shelf? I feel like I was more creeped out about that than the other aspects of the book. Overall, 4/5 stars for you, Laurie Faria Stolarz! I can't wait to read the sequel next year.

laurie stolarz mystery review welcome to the dark house YA